Aboard the "Queen Mary" on our way to Europe.

Ralph was a veteran of World War II, having served in the European Theater with the 144th ordinance company, he was in the Battle of Normandy in Rhineland. He was recipient of the Good Conduct Medal; Meritorious Unit Award; the American Theater Service Medal; Europe, African medal with Four Bronze Stars; and the World War II Victory Medal.

**The below was exerts taken out his his personal diary during WWII.

In October 1942, I took the train from Pittsburgh to Fort Meade, Md. to attend military induction. Then I was taken to Aberdeen Proving Ground along the Chesapeake Bay for Basic and technical training. In the spring of 1943 I was promoted to Corporal, and along with four other non-coms, I was shipped by train to Atlanta Ga. to form and train a new company in preparation for overseas duty. We left Atlanta by train in early September 1943 for Camp Shanks N.Y. On September 19th we were ferried down the Hudson River boarded the Queen Mary, and sailed for Europe on September 20th. The Queen Mary was designed to carry 2,000 passengers, but there were 16,000 on board. Some men were bunked in the swimming pool! We alternated each night with 8,000 above deck and 8,000 below deck. Because of its speed – 32 knots – the ship traveled alone without the benefit of a destroyer escort. To avoid the German U-Boats which were playing havoc on the shipping lanes, the Queen Mary took an erratic course north near Iceland. Every 10 minutes it would change directions. No lights were permitted to be used during the night. Our troop ship arrived at Greenock Scotland, in the Firth of Clyde, just west of Glasgow on September 26, 1943. From there we traveled by train to Aintree, England, near Liverpool where we lived in the horse stables all winter. In early spring we were shipped to Bournemouth in southern England to prepare for the final move to France – The Invasion of Fortress Europe. We boarded at Southampton, crossed the channel on a Liberty Ship, descended its scaling net and landed on Omaha Beach, France. Many of my experiences were in France and Nordhausen and Buchenwald Germany.

Dawn on July 18th 1944 is a day I will never forget. It was one of those crisp, clear mornings that seem to follow a stretch of bad weather. At 9:00 am there was a reverberating sound. As far as the eye could see – from horizon to horizon – the sky was filled with 3500 bombers and supporting fighters, winging their way to St Lo, France. Each plane was dropping thousands of strips of aluminum foil to jam radar detection. They glistened like jewels in the bright sunlight. The bombers dropped their load on St Lo. A town of about the size of Uniontown, then returned to base for a second load. All day they pounded the town until nothing was left but rubble. When we entered the town only a few chimneys were left standing.

It was estimated that the Nazis established 15,000 camps in occupied countries. Camps were of two distinct types: Work Camps, or Extermination Camps. Work Camps used prisoners from captive nations to produce goods of war. Extermination Camps were for the sole purpose of destroying human life. These camps housed Jews, Poles, Czecks, Slaves, French, Hungarians, Dutch and many others, including Germans.

In Work Camps, if a person was too old, too weak, or too young, or unable to perform, they were put to death. Welfare rolls and bad backs were non-existent. Death was carried out by the use of gas, firing squad, starvation, neglect, exposure, experimentation, and torture. Yet, all means of death was torture in itself.

Most of the experiments had no apparent merit; Submersing victims in ice cold water to see how long it would take them to expire; pouring molten lead in the ears to check the level of pain they could endure; hideous experiments on twins and the reproductive organs of women.

On at least one occasion, a train load of prisoners was brought from Holland and Belgium in the dead of winter, stripped of their clothing and left on the railroad siding until all were frozen to death.

It is believed that as many as 24,000,000 were exterminated by one means or another. If all the bodies were placed four abreast end to end, they would reach fromt he east coast of Canada to the west coast. It is any wonder that burial space became a premium.

Although my experiences were in Nordhausen and Buchenwald, I will describe Nordhausen, where 80,000 were put to death. They were both similar. Nordhausen was a work camp surrounding the "HARTZ" mountain, in which 32 miles of underground tunnels were carved. This underground complex housed a complete city designed specifically for the manufacturing of V-1 and V-2 rockets. Surrounding the "Mountain", which was really a hill, was a barbed wire enclosure with guard towers to contain the prisoners. Prisoners worked in the factories and lived in the surrounding camp. There was virtually no shelter. Many lived in the tail fins of the V-2's, and there were no sanitary facilities.

When we entered the camp in early April of 1945, there existed conditions beyond the belief and understanding of civilized man. Nordhausen was a complex of reinforced concrete hangers formerly used by the Luftwaffe in which the ill were thrown until they died of neglect and starvation. They spent their last days in the midst of decaying bodies that had earlier suffered the same fate.

Thousands of bodies were scattered about the complex and in the hangers, in the midst of their own human waste. Only a few showed signs of life, but they were too weak to move. They wore their stripped slave uniforms with the identification number issued by the Nazis. Because many had died from extreme diarrhea, human feces was ankle deep throughout.

Because the survivors were in such critical condition, we were warned not to feed them any food. Their systems would be unable to survive the shock. This was the job of the Medics, whom we greatly admired for the compassion they showed to the poor souls on the brink of death. You can't imagine how difficult it was to refuse food to those with outstretched hands.

The prisoners had difficulty accepting the fact that so many "clean young" - I was 22 - American soldiers were helping them in this their hour of need. It had been years since they had experienced any kindness.

A frame building to one side of the complex contained the crematory, body storage room, and experimental lab. Inside the door on the left was the body storage room where corpses were stacked like cord wood, waiting their turn in the ovens. The room on the right contained a white porcelain slab with drains to channel the blood to containers sitting on the floor. In addition to experiments being performed here, bodies were skinned and lampshades made from the "hides". These shades were prized by the wives of the SS Officers. An especially prized shade contained the identification number of the prisoner. A hallway in the center of the building led to the crematory in the rear, where batteries of ovens were on either side. The bodies were placed on metal stretchers, and rolled inside the oven on metal rollers. When cremation was completed, bones were reduced to fragments about the size of the fingernail. The remains were then shoved with a metal scoop out a small door in the rear of the oven, to a pit outside. Cremation was used for two reasons. It took less space for burial, as well as less labor. It was easier to conceal the evidence.

Day and night the ovens were fired. Twenty four hours each day, seven days a week. The sky was filled with gray ash which settled on the surrounding area like dirty snow, and the odor of burning flesh permeated the air, and yet the Germans living in the area claimed they knew nothing of what was taking place inside the camp.

Eisenhower gave the order: All German men, S.S. first, were ordered to collect the bodies, many had been burned for months, but all were in a state of decay, and place them in rows. They began carrying the bodies by placing a stick beneath the arm pits - note the single stick in the many rows of bodies - to avoid contact with the corpse. A second order went out, only this one didn't come from high command. Every Kraut will pick up the body in his arms and place it neatly in a row. Standing nearby was a soldier just hoping that someone would refuse.

Every man, women and child, even babes in arms, were ordered out of the surrounding area and forced to walk each row to view the atrocities first hand. It would leave no further doubt as to what took place here. Without exception, everyone lost their most recent meal. Eventually, all the victims were given a decent burial in a mass grave. Few were ever identified.

Looking back, I still have difficulty believing that it ever happened. It's a chapter in history that must never be repeated.

After the war our ship home was the “Marine Wolf” and we were taken from France to New York Harbor. 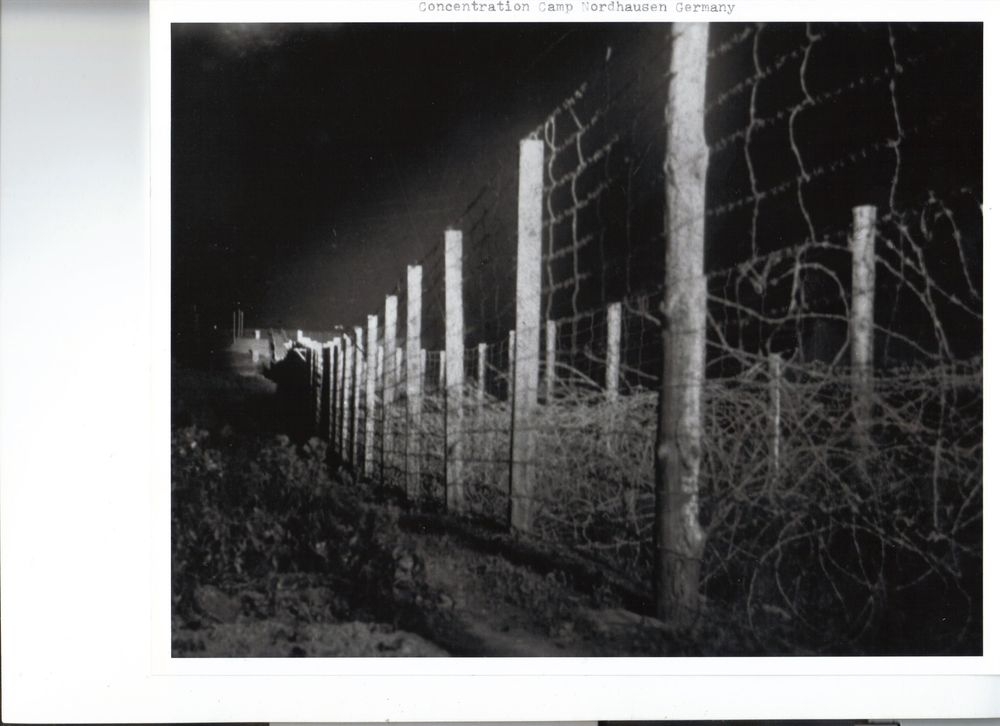 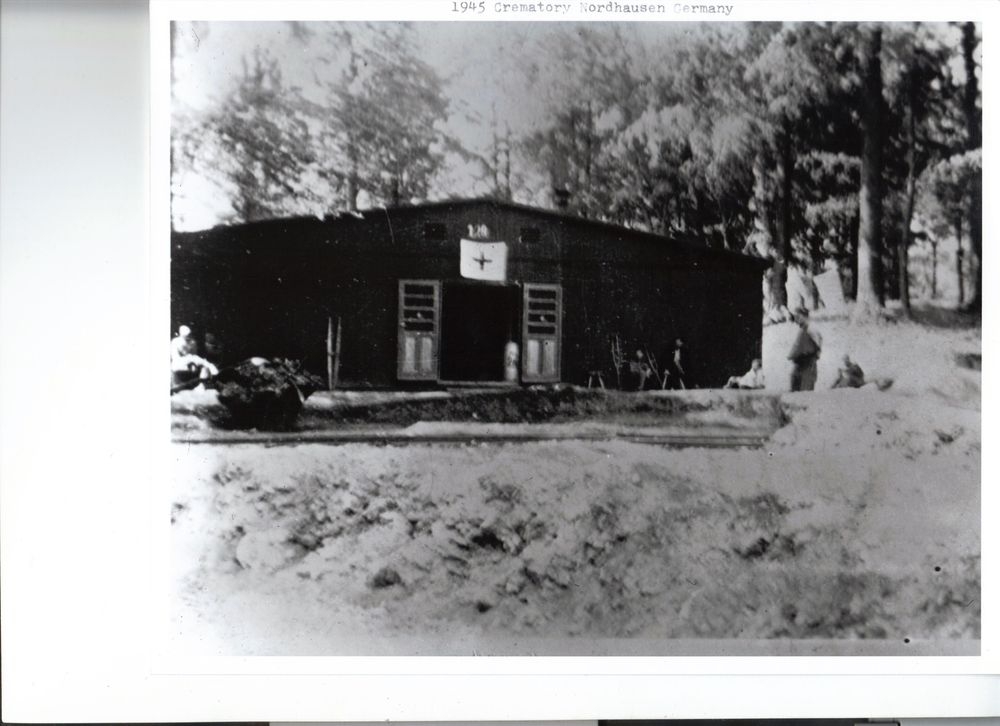 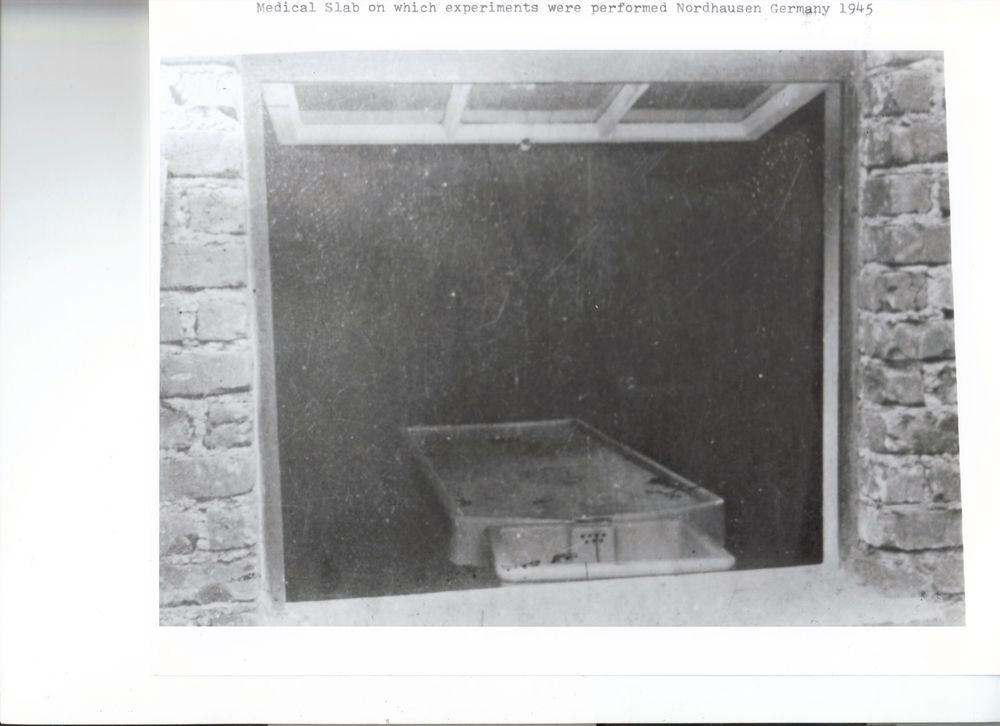 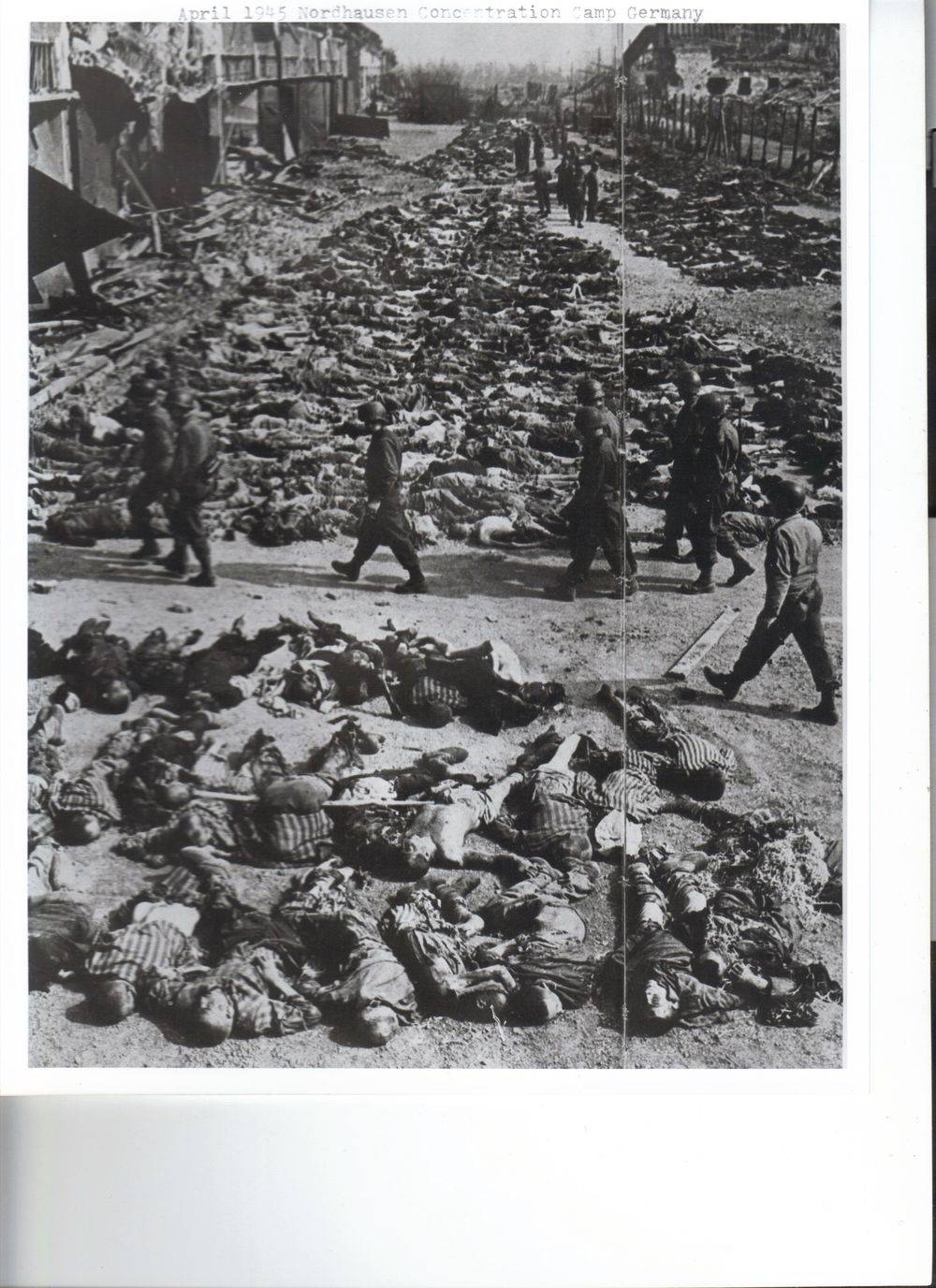 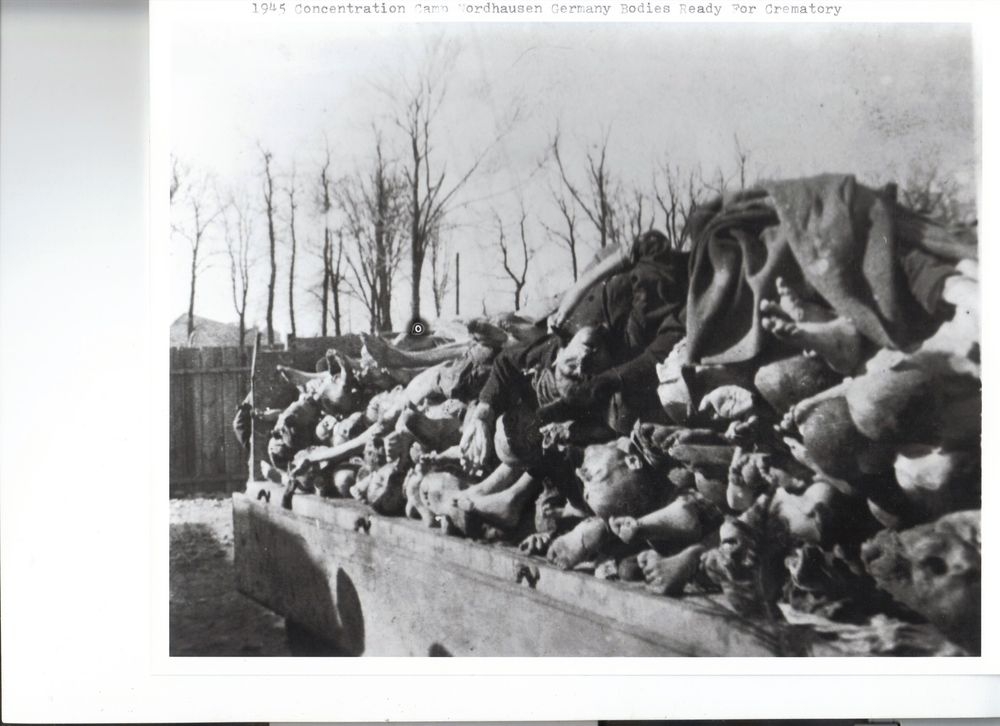 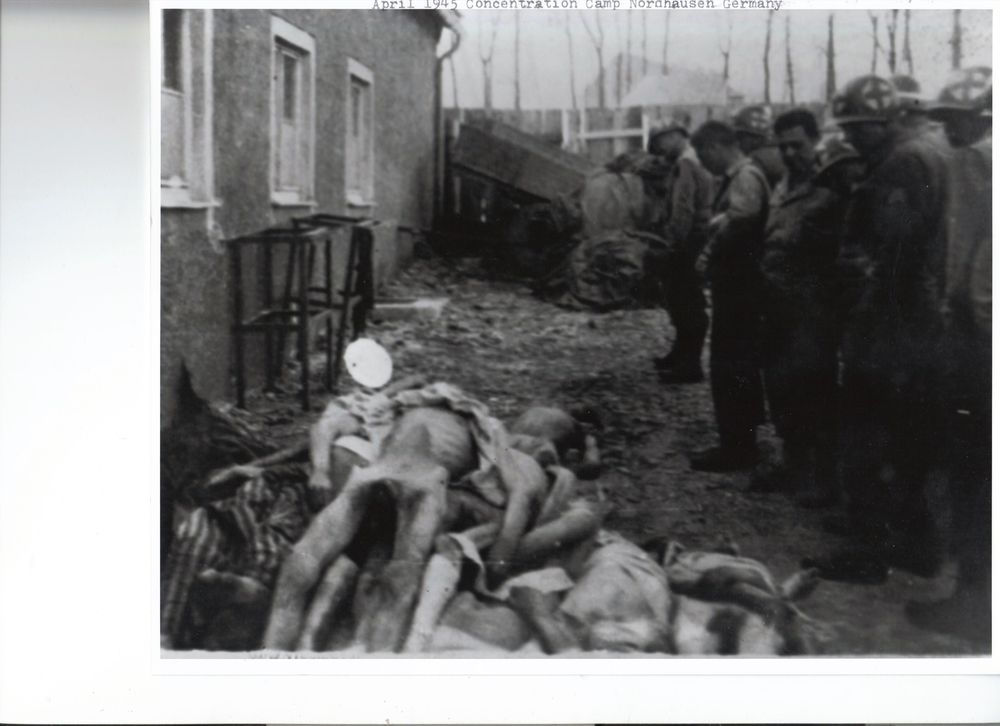 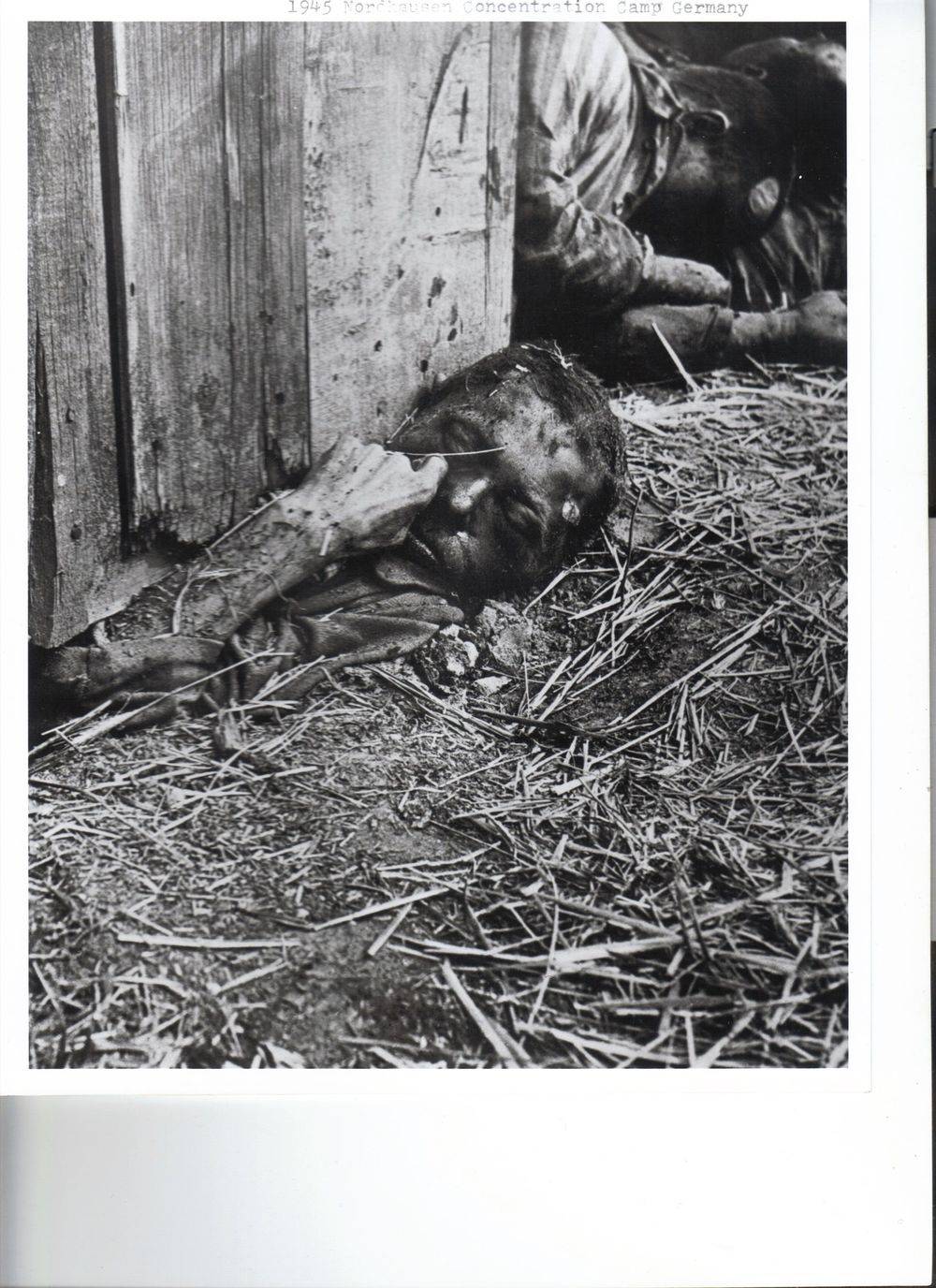 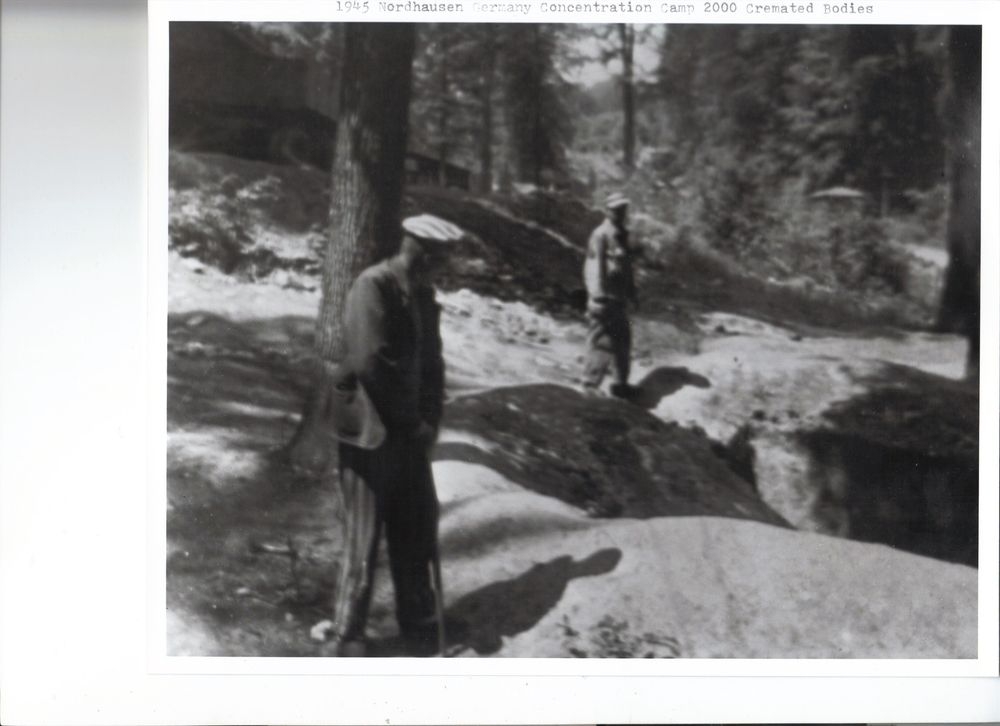 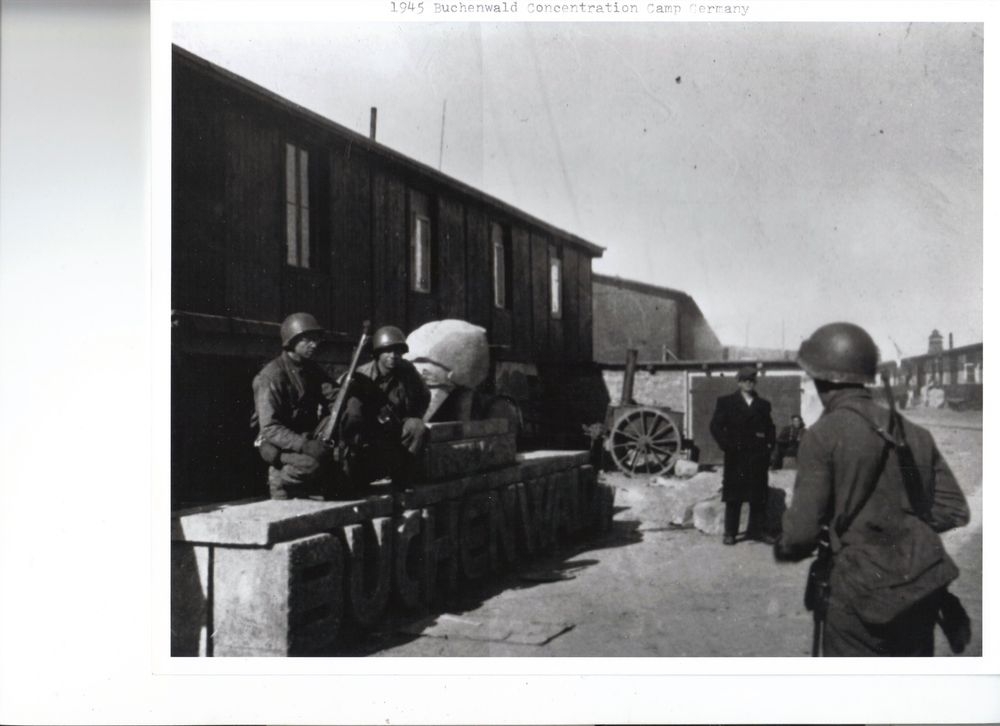 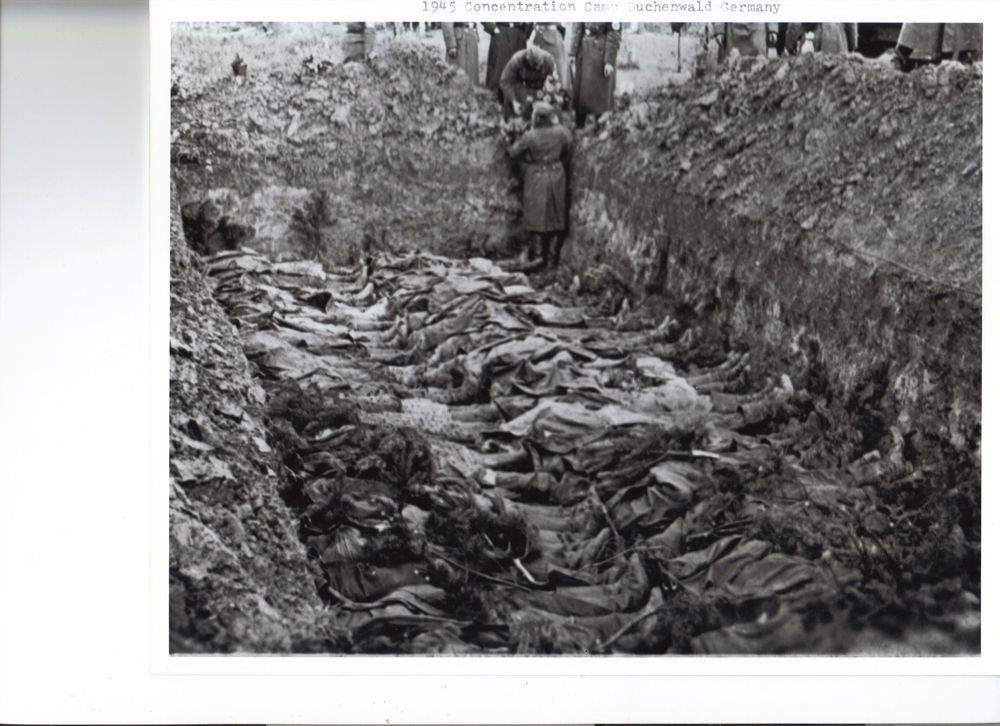 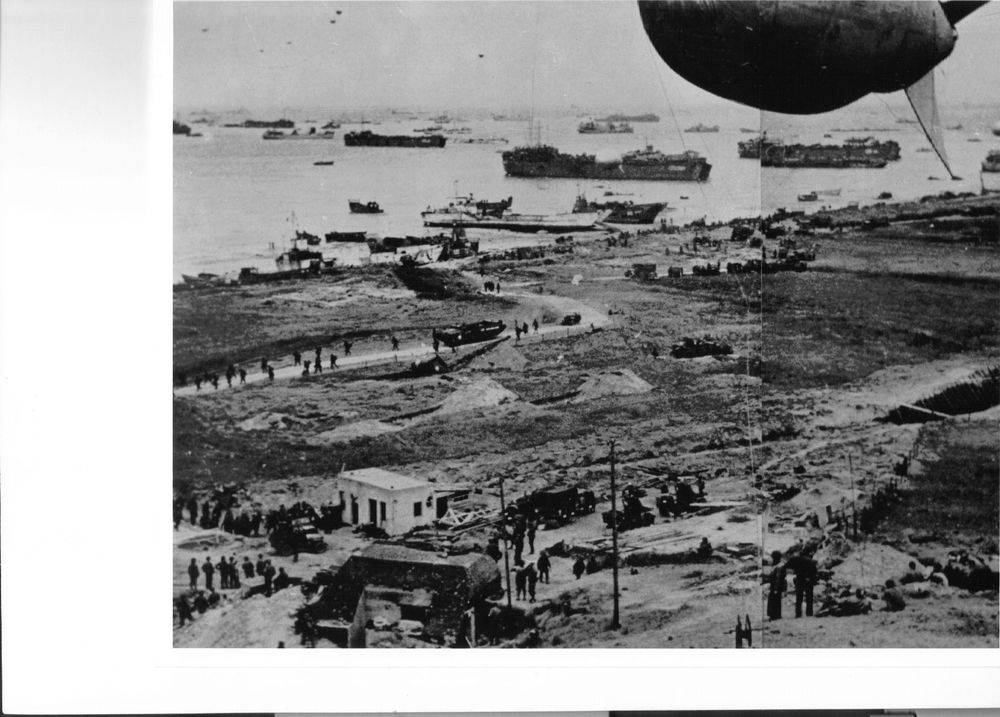 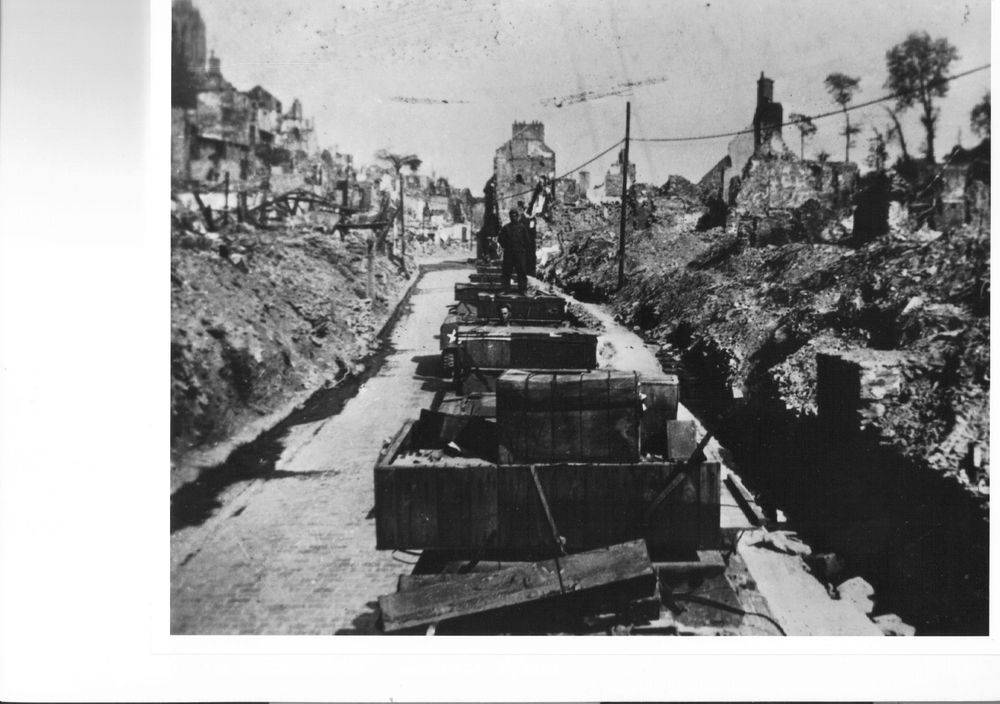 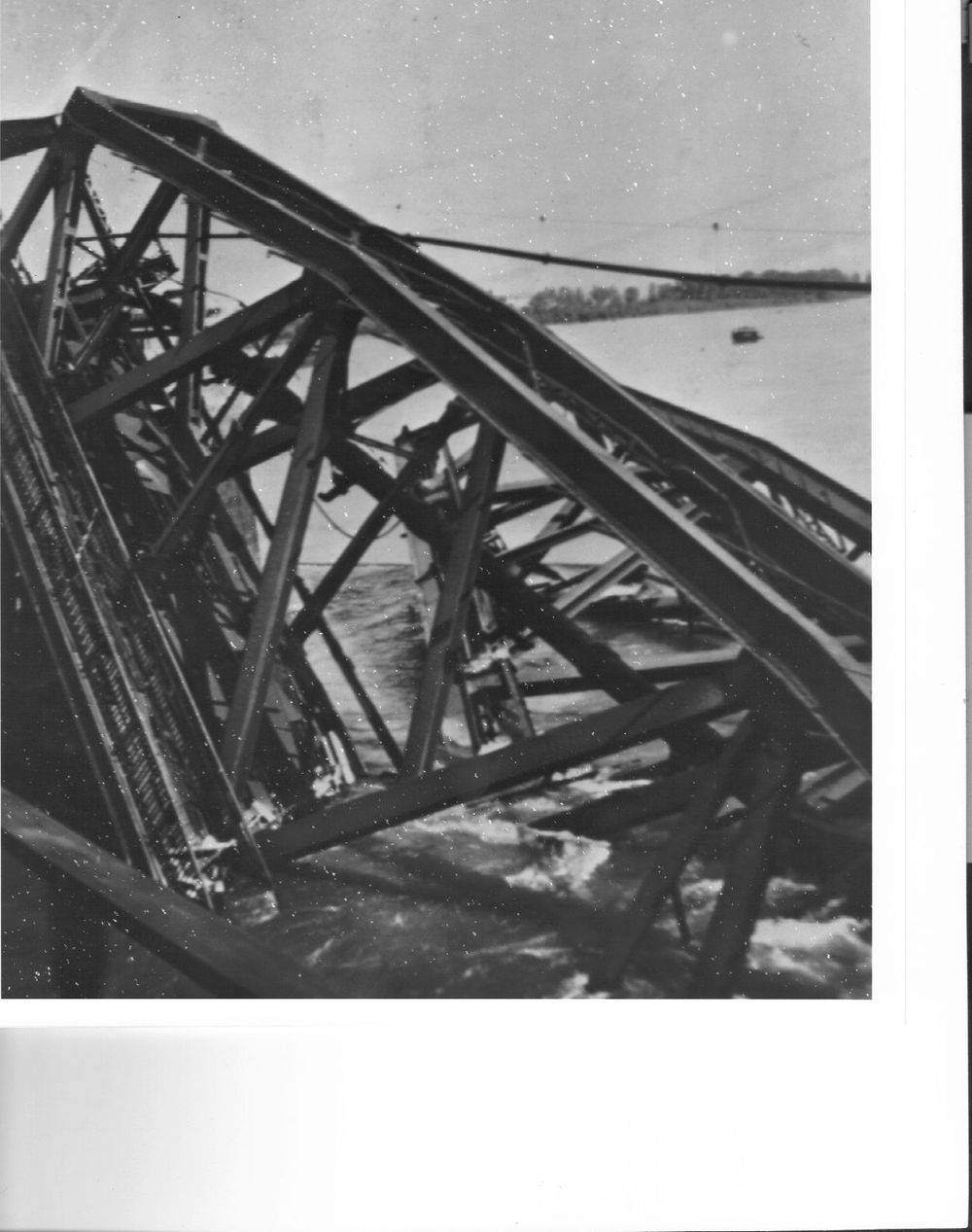 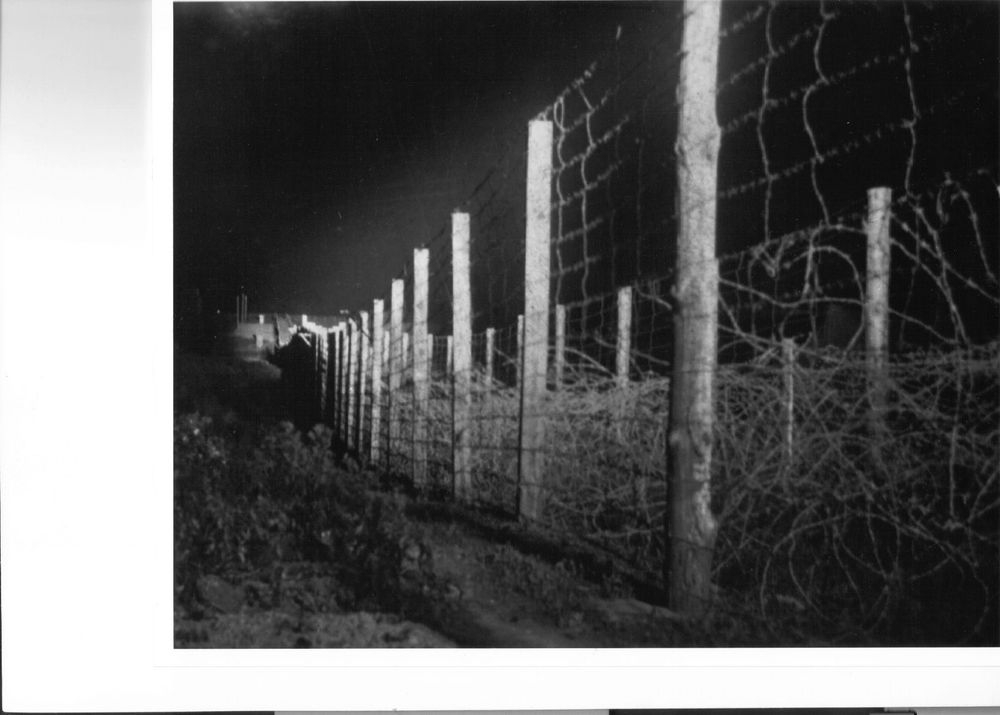 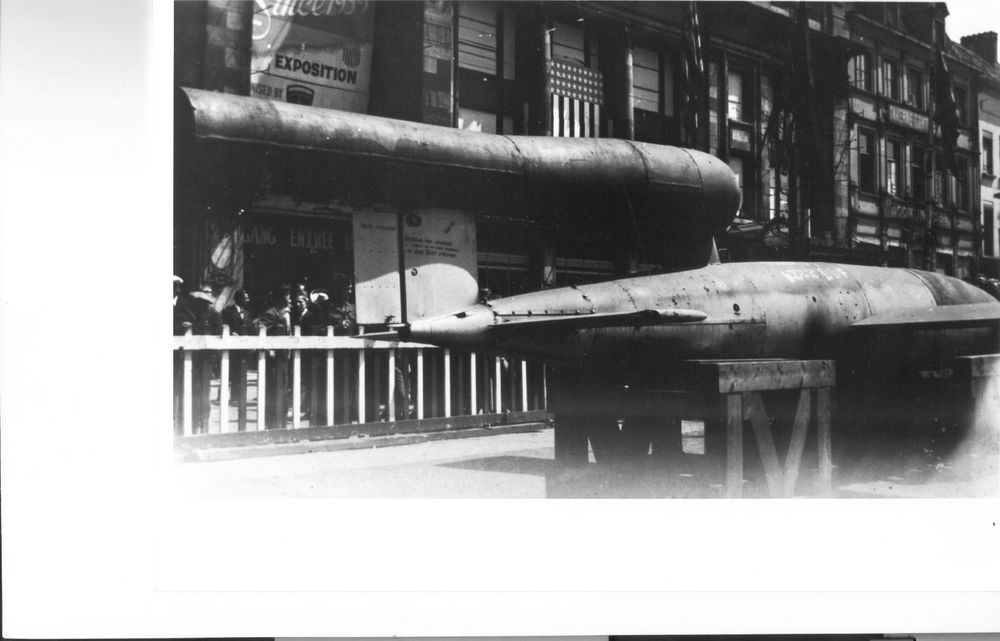 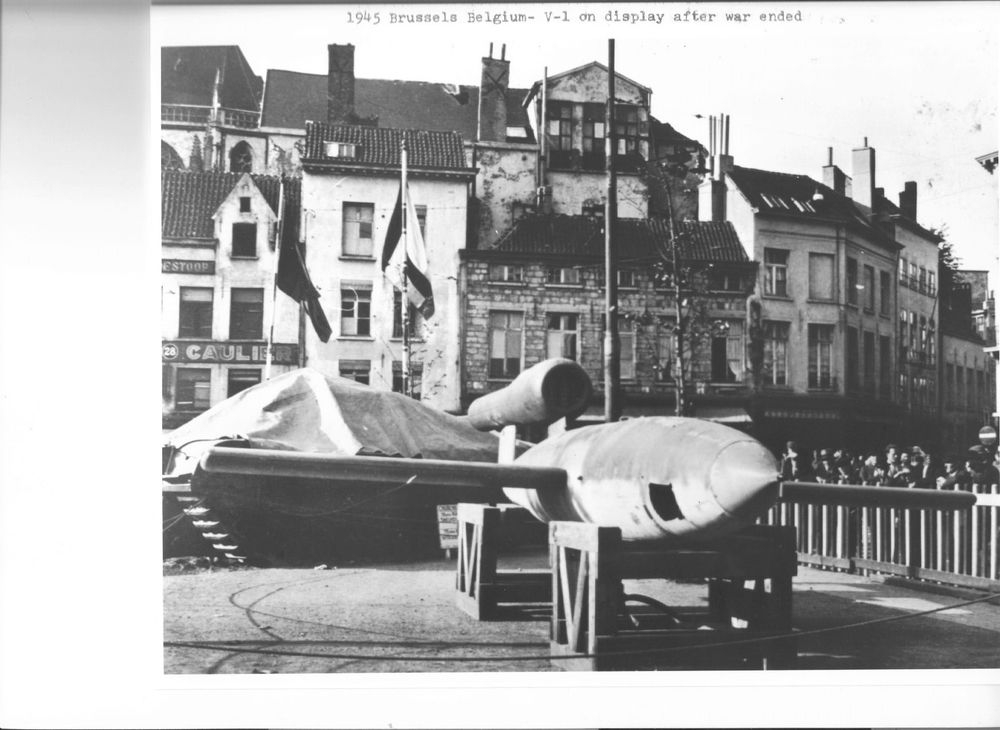 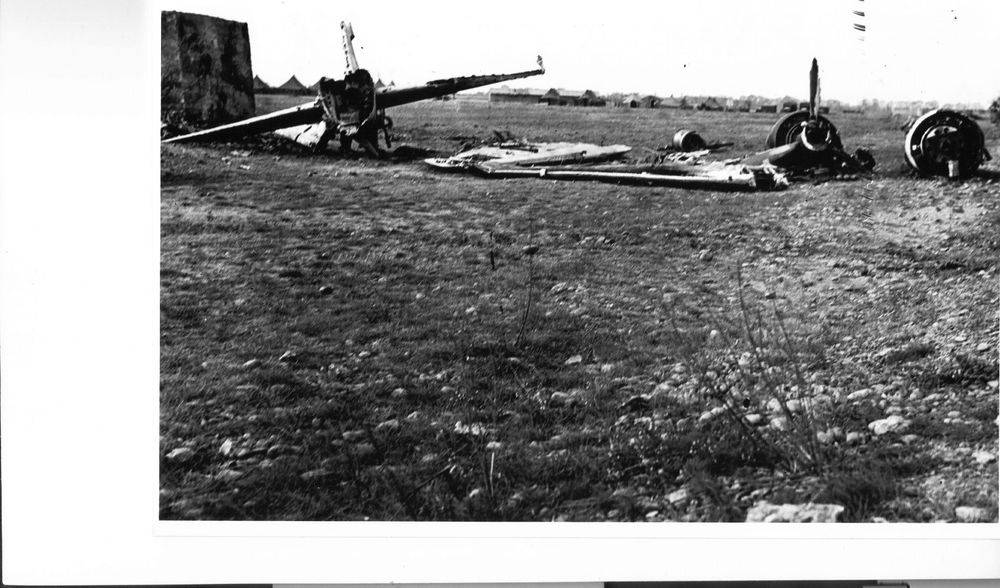 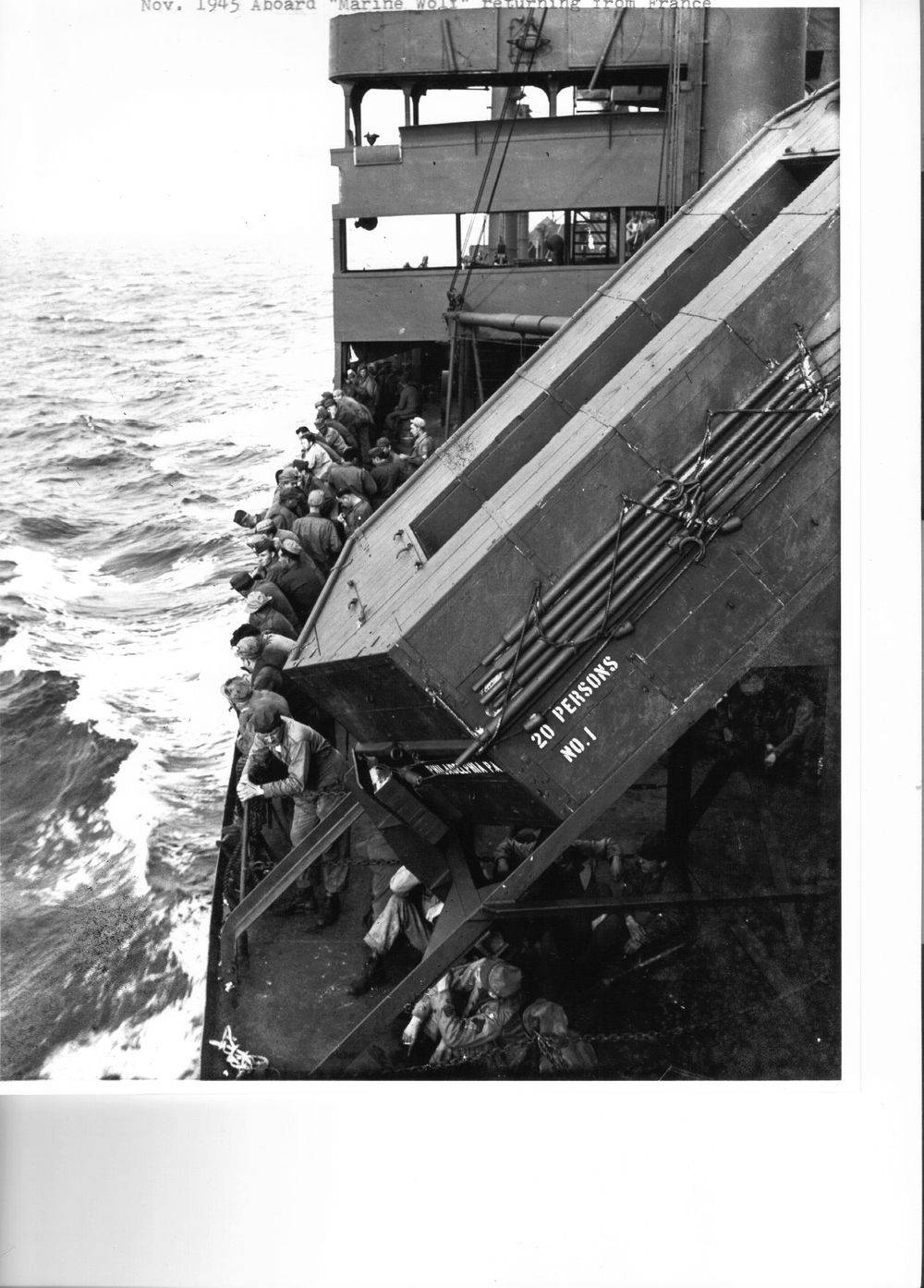