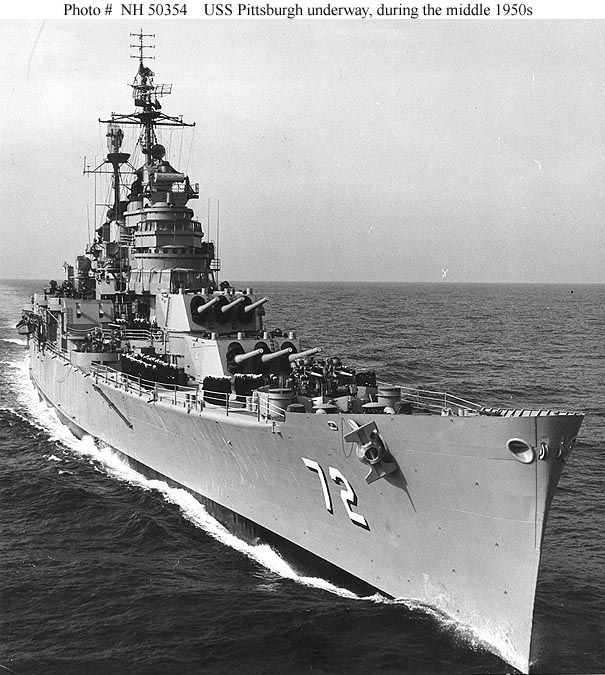 The heavy cruiser USS Pittsburgh was launched on Feb. 22, 1944. Mrs. Cornelius D. Scully, wife of the mayor of Pittsburgh, broke the ceremonial bottle of Champagne across its bow ("sponsored," in naval lingo). The Pittsburgh was commissioned at Boston on Oct. 10, 1944. Following sea trials and training, she was deployed right away to the Pacific to participate in the Battle for Iwo Jima in February 1945.

The next month, the Pittsburgh would be participating in operations close off the Japanese coast in preparation for the invasion of Okinawa. On March 19, Japanese air strikes set the aircraft carrier USS Franklin ablaze. The Franklin would be the most heavily damaged aircraft carrier during the war and would suffer 724 killed and 265 wounded in the battle.

While the Franklin was dead in the water just 50 miles from the Japanese coast, it would be the USS Pittsburgh that towed the damaged carrier to safety, while defending against air attacks attempting to finish Franklin. In addition, the Pittsburgh was responsible for saving 34 of the Franklin's crew from the water.

In June 1945, the USS Pittsburgh was part of a task force conducting operations against Japanese airfields on Kyushu in southern Japan.

Word of a tropical disturbance forming east of the Philippines was known to the fleet.

In the days before weather satellites, even identifying tropical storms was difficult at best. Predicting their course was a complete unknown. The storm would organize into a Pacific typhoon. It quickly outraced the Pittsburgh and its accompanying task force of ships. The storm would later be designated Typhoon Viper

On June 4, Pittsburgh began to fight the typhoon, which would intensify into the next day. Smaller ships would describe the storm as producing "mountainous seas."

Shortly after her starboard scout plane had been lifted off its catapult and dashed onto the deck by the wind, Pittsburgh's second deck buckled, her bow structure thrust upward, and taking over 100 feet of the ship with it, wrenched free. Remarkably, the ship's internal bulkheads remained intact. Watertight doors kept back the sea.

To save the ship, 20 sailors -- led by Executive Officer Horacio Rivero of Puerto Rico and Damage Control Officer John Kircher -- manually reinforced the ship's bow with wood shoring to withstand the continued pounding of the sea.

The ship's commanding officer, Capt. John Gingrich, was forced to reverse the ship's engines, maneuvering to avoid being rammed by the drifting bow and further lessen the stress on the forward part of the ship.

Unable to use its rudder to maneuver, the Pittsburgh negotiated sea and wind entirely by engine manipulations for seven hours until the storm subsided. It would eventually make it back to forward operating bases in Guam on June 10.

The shorn bow would continue to have a life of its own. A Navy tug reported back having found the still floating bow with the radio message "sighted the suburb of Pittsburgh and have taken it in tow."

The bow would be nicknamed the "USS McKeesport" and be towed into Guam to be salvaged. A false bow would eventually be fit onto the Pittsburgh for her return trip to the states.

The ship's commanding officer, Capt. Gingrich, and executive officer Rivero would rise to the rank of four-star admiral.

Capt. Gingrich would become the first admiral designated to lead the Naval Reserve in 1946. As a rear admiral, Rivero commanded the fleet that implemented the quarantine of Cuba during the Cuban Missile Crisis. In 1964 he became the first Latino to achieve the four-star admiral rank in the modern Navy.